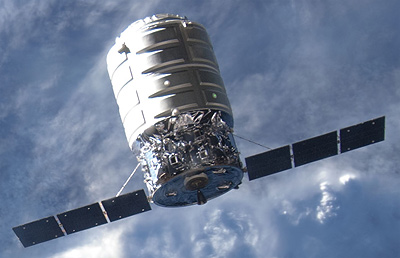 The Spacecraft consists of a Service Module (SM), which can be used with either a Pressurized Cargo Module (PCM) or an Unpressurized Cargo Module (UCM) (now cancelled). The PCM is based on the MPLM-Logistics-Module, while the UCM is based on the Express Cargo Carrier, which were both used with the Shuttle. The PCM is manufactured by Thales-Alenia.

The Cygnus spacecraft is capable of delivering up to 2,000 kg of pressurized cargo to the ISS.

The COTS demonstration mission is scheduled to take place in the fourth quarter of 2011. Subject to NASA's needs, operational COTS missions would follow beginning in the first half of 2011. Orbital will be capable of conducting two to eight operational missions a year by 2012, together with other non-COTS Antares launches. The enhanced Cygnus with increased payload will be used beginning with the fifth Cygnus mission.