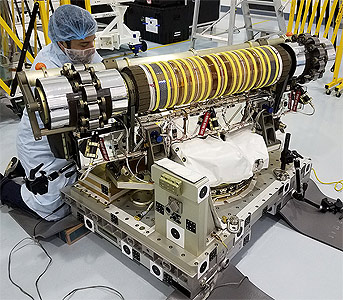 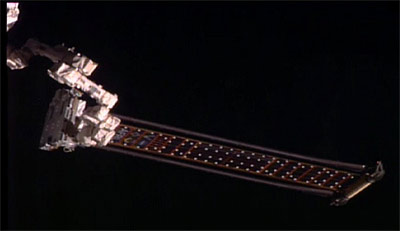 The ROSA (Roll-Out Solar Array) is a new type of solar panel that rolls open in space like a party favor and is more compact than current rigid panel designs. The ROSA investigation tests deployment and retraction, shape changes when the Earth blocks the sun, and other physical challenges to determine the arrays strength and durability at the International Space Station (ISS).

The flight experiment is designed to characterize the performance of the array in a relevant combined space environment to compare to scalable model predictions and on-ground test data. The intent is to compare this on-orbit ROSA data to the model predictions that have been previously validated by on-ground measurements in a simulated environment. On-orbit data are used to fully develop the structural models for unique spacecraft applications and higher power levels. As such, the flight experiment is designed in a combined space thermal, vacuum, and micro-gravity environment in order to:

ROSA is stowed in the trunk of the SpaceXs Dragon capsule during launch. Once on orbit, the ISS robotic arm removes ROSA from the Dragon trunk and temporarily stows it on an ELC. When ROSA operations are ready to begin, the ROSA is picked up by the ISS robotics arm and located in its operations location. The ROSA operations are conducted while attached to the SSRMS/SPDM for a duration of 7 days. During initial deployment of the array, video is required. Data are recorded using embedded sensors on the experiment. Testing is activated and commanded via the ground controllers (ROBO). Payload Health and Status and Experiment Data are downlinked via 1553 communications.

Deployment is monitored by cameras, limit switches, eddy current damper voltage, and accelerometers placed on the tip of the mandrel and the blanket. Visual markers are placed on the booms, blanket, and tip mandrel to provide a visual index of array deployed length. These same markers are used during the dynamics testing to infer the fundamental frequency and associated mode shape through post-processing. A sinusoidal actuation at the array root with a motor will sweep across a frequency range at various rates. The dynamic response is measured via accelerometers on the mandrel and ROSA dynamics response is further characterized during thermally induced impulse loading due to eclipse exit.

The blanket and photovoltaic performance are measured by collecting current-voltage (I-V) sweeps from near the open circuit voltage to near the short circuit current. Sweeps are performed approximately every two minutes for the duration of the mission. Temperature, sun angle and shadowing are measured in order to correlate the measured I-V data.

At the end of the experiment, ROSA was planned to be retracted and placed back into the trunk of the Dragon capsule to be discarded. But as the roll-up did not lock, it was jettisoned on 26 June 2017 to reenter naturally the earth atmosphere.