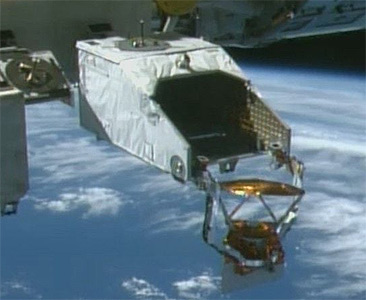 The STP-H8 (Space Test Program - Houston 8) is a combo of experiments to be hosted on the International Space Station (ISS).

STP-H8 will carry the COWVR (Compact Ocean Wind Vector Radiometer) as a replacement to the cancelled free-flying ORS 6 (COWVR) satellite.

The COWVR payload being developed by the Jet Propulsion Lab (JPL) for the Space and Missile Systems Center (SMC) Weather Directorate which would address the need for ocean surface vector wind data, which currently comes from the U.S. Naval Research Laboratorys Windsat payload on the Coriolis (P98-2) satellite, which was launched in 2003 and is well beyond its expected design life.

NASAs Jet Propulsion Laboratory built COWVRs sensor, which improves upon the design of the Advanced Microwave Radiometer flown on the U.S./European Jason-2 and Jason-3 satellites.

Also mounted on STP-H8 is the TEMPEST (Temporal Experiment for Storms and Tropical Systems) payload, which was originally built as a flight-spare instrument for the TEMPEST-D cubesat demonstration mission. This payload is a microwave radiometer, but instead of winds, it measures microwave wavelengths that are sensitive to the presence of water vapor.

The STP-H8 package was launched as an external payload on the Dragon CRS-24 cargo spacecraft. STP-H8 was installed on the JEF (JEM-EF) exposed facility of the Japanese JEM module to enable nadir pointing of the science package sensors and instrumentation.