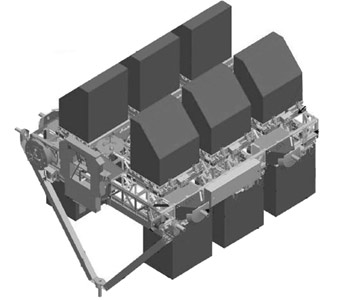 Five ELCs were delivered to ISS before Shuttle retirement (FY 2010); four ELCs were to be attached to the starboard truss 3 (S3) and one ELC is attached to the port truss 3 (P3). By attaching at the S3/P3 sites, a variety of views such as zenith (deep space) or nadir (Earthward) direction with a combination of ram (forward) or wake (aft) pointing allows for many possible viewing opportunities.

Each ELC can accommodate 12 Flight Releasable Attachment Mechanism (FRAM)-based cargos which includes two payload attached sites with full avionics accommodation. The mass capacity for an ELC is 4,445 kg with a volume of 30 cubic meters. The ISS provides power to the ELCs through two 3 kW, 120 Vdc feeds at ISS to ELC interface. ELC power distribution module will convert the 120 Vdc power to 120 Vdc and 28 Vdc. Both power voltages will be provided to each payload attached site by separated buses. 120 Vdc power will also be provided to other cargo attached site. Upon installation of the ELCs, it may take up to four hours for the power to be connected.

External camera ports are also available for the ELC payloads. There are at least 14 camera port locations along the trusses that can be used for payload observation.

A fifth ELC was originally planned, but was cancelled and its place was allocated to AMS 02 instead.