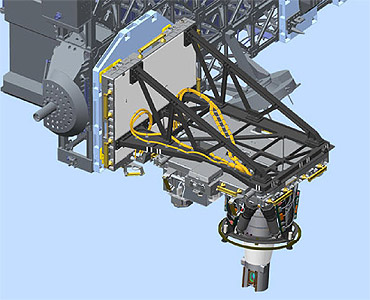 The SAGE 3 (Stratospheric Aerosol and Gas Experiment) is the third generation of solar occultation instruments operated by NASA, with additional elements added to accommodate installation and operation on the International Space Station (ISS).

Earlier SAGE instruments were flown as free-flying satelltites (SAGE) or hosted instruments (SAGE-2 on ERBS and SAGE-3-M3M on Meteor-3M 1).

The SAGE III instrument is used to study ozone, a gas found in the upper atmosphere that acts as Earths sunscreen, and aerosols, or tiny particles in the atmosphere. These measurements are vital inputs to the global scientific community for improved understanding of climate, climate change and human-induced ozone trends.

NASA scientists are preparing to send a SAGE III instrument to the International Space Station (ISS). Instead of flying on an uncrewed satellite, SAGE III will be mounted to the ISS at the ELC 4 platform, where it will operate alongside experiments from all over the world in the space-based laboratory. The orbital path of ISS will help maximize the scientific value of SAGE III observations as it provides global, long-term measurements of key components of Earths atmosphere.

The spectrometer uses an 800-element CCD linear array to provide continuous spectral coverage between 290 and 1030 nm. Additional aerosol information is provided by a discrete photodiode at 1550 nm. This configuration enables SAGE III to make multiple measurements of absorption features of target gaseous species and multi-wavelength measurements of broadband extinction by aerosols.