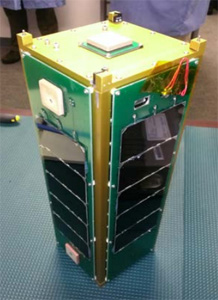 GEARRS or GEARRSAT (Globalstar Experiment And Risk Reduction Satellite) is a 3U CubeSat built by NearSpace Launch in collaboration with the Air Force Research Laboratory (AFRL).

The satellite is to investigate, if the use of the Globalstar satellite communications network is a feasible option for the command and control of a small satellite systems and cubesats.

The satellite is based on the recent technology demonstrated by the Taylor University and NSL TSAT experiment.

GEARRS was launched on board of Cygnus CRS-2 to the International Space Station to be deployed from the Japanese airlock. It was deployed on 4 March 2015. GEARRS reentered on 8 November 2015.