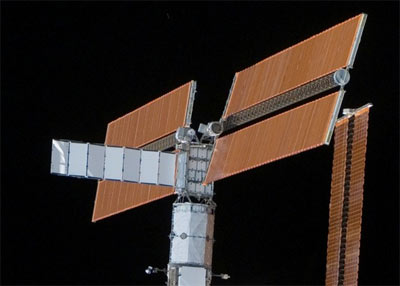 These elements were originally planned as two seperate truss structures, but were finally built as joint elements, hence the 3/4 designation. Each element together contain a pair of solar arrays, a radiator and a rotary joint that will aim the solar arrays, and connects P3 to P4 and S3 to S4 respectively.

Following major subsystems are located on P3 and S3 respectively: the Segment-to-Segment Attach System (SSAS), Solar Alpha Rotary Joint (SARJ), and Unpressurized Cargo Carrier Attach System (UCCAS). The primary functions of the P3/S3 truss segment are to provide mechanical, power and data interfaces to payloads attached to the two UCCAS platforms; axial indexing for solar tracking, or rotating of the arrays to follow the sun, via the SARJ; movement and work site accommodations for the Mobile Transporter. The P3/S3 primary structure is made of a hexagonal shaped aluminum structure and includes four bulkheads and six longerons. The P3/S3 truss also supports ELC (EXPRESS Logistics Carrier) locations.