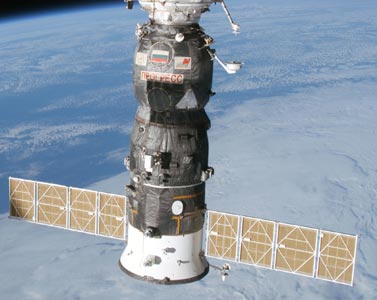 The modified Progress-M is a uncrewed cargo spacecraft based on the Progress-M. In the new version, the Argon-16 computer (introduced on Soyuz-T back in the 1970s) is replaced by the new TsVM-101 computer. The latter is a much more capable computer, is almost 10 times lighter (8.3 kg vs. 70 kg) and much smaller. The analogue telemetry system is also replaced by a smaller digital telemetry system called MBITS.

The Progress-M 12M was lost due to a launch vehicle problem and did not reach orbit.

Progress-M 27M was delivered to orbit, but upper stage did not shut down correctly (possibly due to explosion onboard) and damaged the craft during separation. 1.5 seconds before spacecraft separation the telemetry was lost from both upper stage and spacecraft. Progress went into a strong tumble after separation from the launch vehicle. Some telemetry from spacecraft was received through the back-up channel, indicating that many spacecraft systems function off-nominally. Pressure was lost in fuel lines leading to main engine. JSpOC has detected 44 pieces of debris in the vicinity of the Progress vehicle and its upper stage. Attempts to establish contact and to stabilize the vehicle failed. The mission was lost.