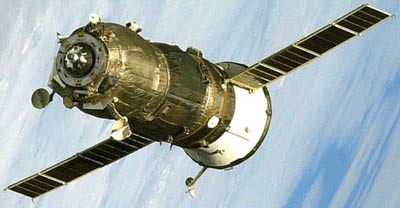 An automated version of Soyuz, known as Progress-M, was developed to carry propellant and cargo to the Salyut and Mir space stations and it will serve the same purpose for the International Space Station (ISS). Although the Mir and ISS have their own propulsion systems, generally it is the Progress vehicle which will perform periodic reboosting maneuvers to maintain the Space Station orbital altitude. The Progress is approximately the same size as the Soyuz but it has a slightly higher mass at launch of approximately 7150 kg. The Progress spacecraft docks automatically to the space station and there is also a backup remote control docking system. The Progress is composed of three modules: Cargo Module, Refueling Module, and Instrument-Service Module.

Two units were modified to carry the VDU thruster modules to the space station Mir (Progress-M 14 and 38).