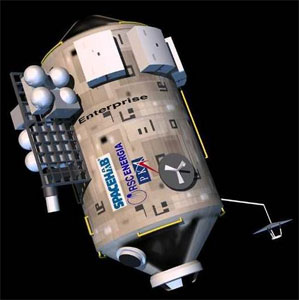 MPM (Multi Purpose Module) Enterprise was a module to replace the DSM (Docking and Stowage Module). In 2000, a joint resolution document between the Russian Aviation and Space Agency (RASA) and RSC Energia (RSCE) confirmed agreements to replace the Docking and Stowage Module of the International Space Station (ISS) with the commercial module Enterprise. Enterprise was to be designed and built as a commercial venture by RSCE and SPACEHAB for launch and deployment in 2003.

The first commercial facility to be attached to the ISS, it was to serve as a multimedia production facility as well as supporting scientific research, station logistics and stowage and acting as a docking location for visiting Soyuz and Progress supply spacecraft.

The MPM ENterprise was to be launched together with the SPP (Science Power Platform) on a Shuttle mission.

Due to lack of funds, the MPM Enterprise was cancelled. It was replaced by the MLM module.