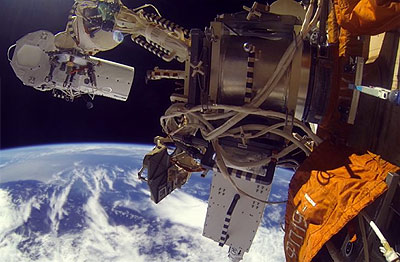 UrtheCast 1 is an earth observation payload attached to the ISS.

The cameras interface with the data handling electronics, built by MDA in Vancouver, Canada, which pass the data through the ISS systems down to the ground where Urthecast make the images available for streaming to their customers and to the public.

UrtheCast 1 was delivered to the ISS on board of the Progress-M 21M cargo sip. It is attached to the Zvesda module of the ISS, where it was mounted in the course of two spacewalks. The Urthecast payload is operated via Energia.

Energia terminated an agreement to host UrtheCast cameras on the International Space Station at the end of 2016. Without Energia, UrtheCast is currently unable to offer new tasking for the Iris and Theia cameras at what the company considers an acceptable service level.