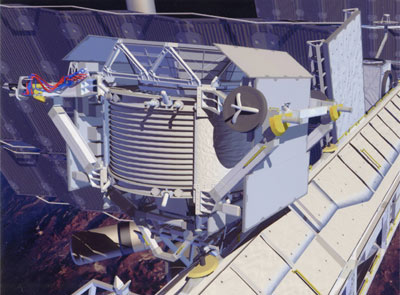 The AMS-02 (Alpha Magnet Spectrometer) experiment is a state of the art particle physics detector in space. After the launch with the Space Shuttle it is designed to measure cosmic ray spectra on the ISS for a period of 3 years. The main scientific focus is the search for anti matter and dark matter.

In order to detect dark matter one strategy is to look for relic annihilations in the galactic halo, which might produce a detectable access of antiprotons or positrons in cosmic rays.

AMS is build by an international collaboration of 500 physicists from 56 institutes from 16 countries.

A prototype was tested in space with the AMS-01 flight in 1998 on board of the Shuttle Discovery, where it was demonstrated for the first time that it is possible to operate a modern particle physics detector in space.

The key element of the AMS-02 experiment is a superconducting magnet which generates in a cylindrical volume of 0.6 cubic meter a magnetic field of 0.9 Tesla. Inside this volume a high precision double sided silicon strip detector measures the trajectories of charged particles at 8 planes with a precision of 8 micron per point in the coordinate perpendicular to the track. These precision measurements determine particle momentum and charge up to the TeV scale. The detector is completed on top by a transition radiation detector and on the bottom by a ring image cherenkov counter and an electromagnetic calorimeter for particle identification. The expected performance of AMS-02 should improve in all relevant aspects the previous measurements by several orders of magnitude.

The AMS-02 experiment was to be launched by a Shuttle, but has now dropped out of the manifest. In early 2009 the AMS-02 was reinstated on an additional Shuttle mission. It was launched on 16 May 2011 on the STS-134 mission and was successfully attached to the ISS.