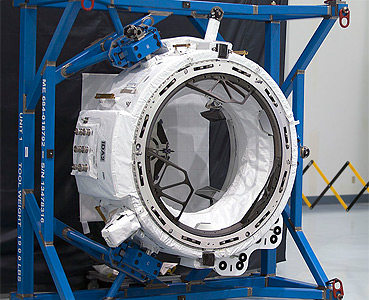 The IDA 1 and 2 (International Docking Adaptor) are adaptors to allow the Starliner (CST-100) and Dragon-2 crewed capsules to dock with the PMA adaptors of the ISS.

These adaptors will be carried in the trunk of Dragon cargo capsules to the ISS, where they will be mated to the APAS-95 docking adaptors of the PMAs. The other side features the NASA Docking System (NDS), which will be used by the new crewed spacecrafts. NDS uses a new design of docking system by Boeing, called SIMAC (Soft Impact Mating Attenuation Concept), which is a non-proprietary design essentially based on APAS-95 but featuring a narrower soft-capture ring. The adapter will be compatible with the International Docking System Standard (IDSS).

Boeing is the prime contractor for the IDAs with the primary structure built by Russian company RSC Energia.

IDA-1 was launched on Dragon CRS-7 to be attached to Node-2's forward PMA-2. The module was lost in a launch failure.

Parts for a third IDA to replace the lost IDA-1 were available. IDA 3 will be launched in 2019 on the Dragon CRS-18 mission to be attached to Node-2's zenith PMA-3.