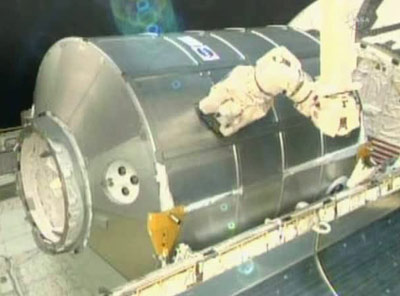 PMM (Permanent Multipurpose Module) is the modified MPLM 1 logistics module, which is permanently attached to the ISS.

The module, which was flown seven times as a logistics module, was modified to improve the meteroid-shielding and remove unneeded equipment. The PMM was launched and attached during the STS-133 Shuttle mission.

On 27 May 2015 the PMM (Leonardo) storage module was moved with tthe SSRMS arm from the Unity (Node 1) nadir port to the Tranquility (Node 3) forward port. This was part of a major reconfiguration of the station to support future commercial crew and cargo spaceships.