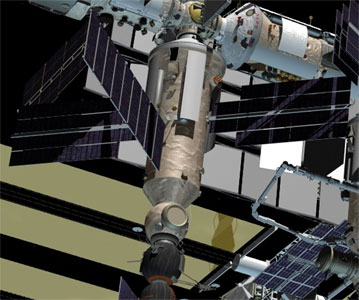 RM 1 (Research Module 1, IM 1, Issledovatel'ny Modul') was a Russian science module of the International space station ISS. Due to the deletion of several modules, it was eventually planned to take the place originally reserved for the UDM (Universal Docking Module), which was originally planned as a hub for two RM type modules.

The RM 1 was be based on the TKS-type of module. In contrast to earlier configurations, the RM 1 was to have three solar panels as a remedy to the power-shortfall of the Russian segment caused by the cancellation of the SPP (Solar Power Platform). Additionally it was to get a multi-port docking adaptor to allow the docking of Soyuz-TMA and Progress-M supply ships.