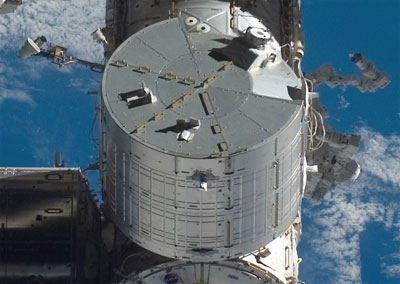 The JEM (Japanese Experiment Module) - a.k.a. Kibo - consisting of three modules, is the Japanese segment of the international space station ISS.

The Experiment Logistics Module (ELM) takes a roll of an on orbit storage area which accommodates experiments or consumables. The Pressurized Module and the Exposed Facility each accommodates ELM. The ELM can also serve as a transportation container, it can be detached from ISS, returned to Earth by a Space Shuttle and be relaunched to space with cargo.

When the Experiment Logistics Module Pressurized Section (ELM-PS) is launched for the first time, it will be used as a container to carry experiment racks and system racks. Once on orbit, it will be mainly used as a storage facility. System devices, tools to be used for maintenance of experiment devices, materials for experiments or spare items for trouble are stored inside the ELM-PS. The ELM-PS volume is less than that of the PM. A total eight racks can be accommodated, but all of them are just stored.