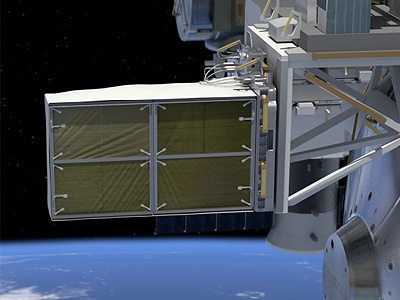 The SDS (Space Debris Sensor) is a flight demonstration of an impact sensor designed to detect and characterize impacts by small debris objects on the International Space Station (ISS).

The sensor will be attached to the ESA Columbus module facing the ISS velocity vector with one square meter of detection area. The sensor combines multiple technologies to measure the time, speed, direction, size, and density of objects greater than 50 µm in size. With this information, as well as the orbital position of each detection, the sensor should collect enough data over its intended minimum 2-year mission to update the NASA Orbital Debris Engineering Model for objects smaller than 1 mm near ISS altitudes. With lessons learned from the SDS experience, a follow-on mission to place a second-generation sensor at higher altitudes will someday provide the ability to update the risk from small debris to many operational spacecraft in low Earth orbit.

SDS was be transported in the unpressurized trunk of a Dragon cargo craft to the ISS, where it was mounted on 1 January 2018 on the COF (Columbus) module. On 26 January 2018 SDS stooped working, with attempts to reactivate the sensor still ongoing by May 2018. In January 2020, SDS was removed from Columbus and transfered to Cygnus CRS-12's passive Flight Releasable Attachment Mechanism (FRAM) for disposal.