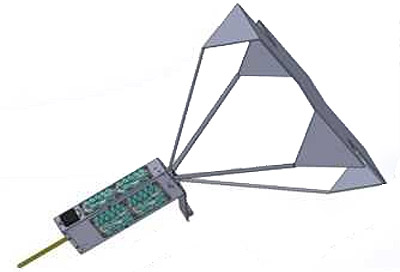 TechEdSat 3p (Technical and Educational Satellite 3) is a 3U CubeSat. It was built as a conjoined project between San Jose State University (SJSU) and the University of Idaho as a collaborative engineering project, with oversight from the NASA Ames Research Center.

The TechEdSAT-3p was the first flight test of an Exo-Brake passive de-orbit system. Building on the predecessor, TechEdSAT-3p was a triple cubesat (3U) with a set of dual advanced avionics systems powered by the previous core system. In 2U of the packaging (roughly 2/3 of the volume), there is stowed an erectable deployment system that would place the Exo-Brake in the desired orientation. Scaled as a 10 day experiment, the deployed system has the ballistic coefficient of 5 kg/m2 - and is constructed as a tension-based structure that would not entangle itself. During the de-orbit process, GPS data from the dual avionics as well as collected TLE (Two Line Elements) provided by the USSTRATCOM were used to analyze the flight dynamics and compared to computational models. This experiment was the antecedent of related experiments at larger scale (e.g., for a 1.5 day de-orbit) and controllability. The effort was built by teams from the San Jose State University.

TechEdSat 3p was launched on board of HTV 4 to the International Space Station, from where it was deployed.

TechEdSat 4 is a similar satellite. Its primary objectives are to further develop a tension-based drag device, or Exo-Brake, and demonstrate frequent uplink/downlink control capabilities.

TechEdSat 4 was launched on board of Cygnus CRS-2 to the International Space Station to be deployed from the Japanese airlock. It was deployed on 4 March 2015.