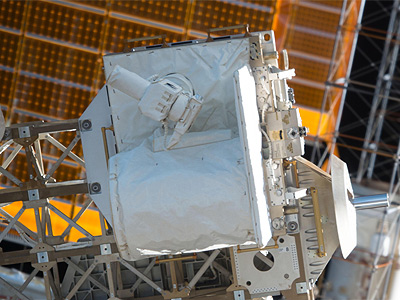 The OPALS (Optical Payload for Lasercomm Science) is an experimental payload for the International Space Station (ISS), to test the potential for using a laser to transmit data to Earth from space.

Instead of being broadcast on radio waves, data is packaged onto beams of laser light and hardware on the International Space Station will point the laser to a receiver station on the ground. Radio waves transmission is limited by the speed that it can transfer data, but beaming information packages with lasers can greatly increase the amount of information transmitted over the same period of time.

Turbulence in Earths atmosphere can distort such data transmission, but now researchers have solved that problem using adaptive optics, or a system that corrects the received signal to compensate for distortions. This adjustment potentially increases the speed at which laser data can be transmitted and is particularly important when attempting to send data at high rates during times of high atmospheric turbulence. Overall, the investigation indicates that high speed space to ground optical communications are possible from a fast moving spacecraft.

The Optical Payload for Lasercomm Science (OPALS), which is part of the JPL Phaeton hands-on training program, aims to demonstrate free-space optical communications technology. During the technology demonstration, a video file from the investigation on the International Space Station (ISS) is transmitted to JPLs Optical Communications Telescope Laboratory (OCTL) located at Wrightwood, California. A digital video file, encoded with forward error-correction to protect against bit errors during transmission, is modulated onto the downlink laser using on-off keying (OOK); a simple form of present vs. absent carrier wave modulation. A beacon-assisted pointing architecture is used to achieve robust and accurate pointing and includes: a camera with a wide angular view used on the ISS investigation to detect the laser beacon transmitted from the OCTL, and an on-board feedback algorithm that actively tracks this beacon as long as line-of-sight is maintained. This enables reliable transfer of the video file in the presence of many disturbances, such as the ISS motion, gimbal jitter, turbulence and background noise. Because the focus of OPALS is to demonstrate end-to-end functionality of an optical communication link, the information transfer rate is chosen conservatively as 10 megabits-per-second or higher.

The OPALS Flight System refers to the optical communications investigation assembly that is externally-mounted on the ISS. It consists of a gimbal-mounted optical head, and a sealed container to hold the electronics, laser and motor drivers. The optical head houses a camera to track the beacon and a lens collimator system to transmit the data laser. The Flight System autonomously detects, acquires and tracks the uplink beacon that is transmitted from the ground telescope as a pointing reference, and uses an on-board feedback system to mitigate external disturbances. The Ground System refers to the receiver system that is located at the OCTL. It utilizes the OCTL one-meter aperture primary telescope to receive the downlink signal and transmit the reference beacon. The received optical signal is acquired and focused onto a photodetector, which converts the optical signal to a baseband electrical current. After digitization, synchronization, error-correction and post-processing, the video file is displayed on a monitor. The OCTL telescope uses ISS orbital predicts, as well as azimuth and elevation profiles to follow the ISS as it traverses its path across the sky.

After OPALS is installed and ready for operation on the ISS, a 90-day mission begins. During these 90 days, OPALS must downlink a video from the ISS to the JPL Optical Communications Telescope Laboratory (OCTL) via an optical communications link. Opportunities for a downlink demonstration occur once every three days on average. One successful downlink of a video file is required to fulfill OPALS technical mission success requirement.

OPALS was transported by the Dragon CRS-3 transporter to the ISS in April 2014. OPALS is installed on the ELC 1 platform.

OPALS attempted 26 downlinks, of which 18 were successful. Half of the successes were attempted at night, and half during the day. Despite many downlinks being considered a failure, some of those failures were able to send the entire data package, since downlink data consisted of the same data package repeated many times.