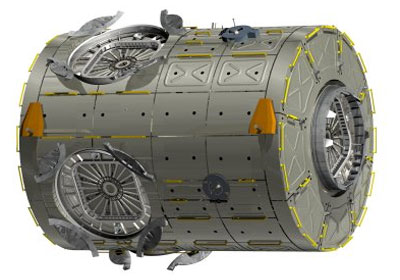 The installation of NASA's Node 2 (Harmony) denotes the U.S. Core Complete stage of International Space Station assembly and increases the living and working space inside the station to approximately 500 cubic meters. It also allows the addition of international laboratories from Europe and Japan to the station.

Node 2 provides a passageway between four station science experiment facilities: the U.S. Destiny Laboratory, the Kibo Japanese Experiment Module, the European Columbus Laboratory and the Centrifuge Accommodation Module. It also provides connecting ports for Multi-Purpose Logistics Modules, the Japanese HTV and the Pressurized Mating Adapter 2 to which space shuttles dock. The Space Station Robotic Arm, Canadarm2, can operate from a powered grapple fixture on the exterior of Node 2.

Under contract of the Italian Space Agency, Alenia Spazio in Turin, Italy, led a consortium of European sub-contractors to build the node. It was built for NASA under a barter agreement with the European Space Agency in exchange for the launch of the European Columbus Laboratory by the space shuttle to the International Space Station.

The aluminum node is 7.2 meters long and 4.4 meters in diameter. Its pressurized volume is 70 cubic meters, and its launch weight is approximately 13,600 kilograms.

Node 3 is also designed to provide berthing locations with power, data and commanding, thermal and environmental control, and crew access for more attached habitable volumes or for crew transportation vehicles or stowage, or an appropriate combination of all of these.

Node 3 will also have a Cupola attached to it with a Robotic Work Station inside it to assist in the assembly/maintenance of the ISS as well as offer a window for Earth observations. Node 3 was launched with the Cupola attached to the nadir port. After mating with the nadir port of Unity, the Cupola will be moved to the front port. Node 3 will also have redundant ports for the logistics module or the Space Shuttle to be berthed.