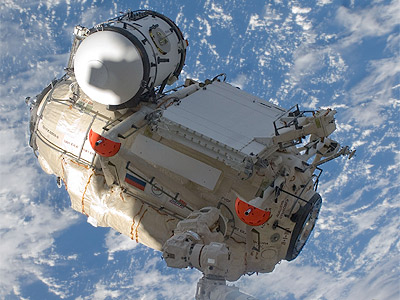 The MRM 1 (Mini Research Module 1, MIM 1, Maliy Issledovatel'ny Modul' 1), formerly designated DCM (Docking Cargo Module) or SGM (Stikovochno Gruzovom Modul), is a docking module of the International space station ISS, which extenda the Zarya nadir docking port, so that it will not be blocked by the Node-3 element. DCM was built on the pressurised section of the cancelled SPP(NEP) Science Power Platform. DCM has two docking units: one - for docking to the nadir port of Zarya module and one for docking of Soyuz TMA spacecraft.

The DCM was delivered in 2010 to the ISS by a Shuttle flight. NASA also was purchasing the capability for the Russian Docking Cargo Module (DCM) to carry 1.4 tons of NASA cargo to the space station. By adding the module, NASA was able to fly outfitting hardware for the Russian MLM (Multipurpose Laboratory Module) on the DCM, eliminating the need to fly a cargo carrier and some ballast on an other shuttle flight.

When MLM has arrived at the statip, over time, all these external elements will be transferred to the MLM. The fully assembled MLM-1 was sent to Kennedy Space Center in June 2009 with launch taking place in May 2010 on Mission STS-132/ISS-ULF4. DCM was located on the rear of the shuttle. Once docked to the station, the DCM was moved to its location by the Shuttle arm and the station SSRMS.