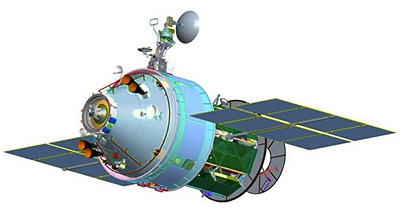 Oka-T is a planned Russian microgravity research satellite for ultra-sensitive material science experiments. It is planned to be serviced in orbit by docking with the ISS.

The Oka-T is under development at RKK Energia. It consists of a pressurized module with a docking adaptor and a service module housing the propulsion systems, attitude control and power systems.

Oka-T is planned to rendezvous and dock with the Russian segment of the ISS for servicing and for exchange of the experiment samples. In the docked operation phase of flight, ISS crew performs maintenance operations for OKA-T, including servicing of experimental equipment, as well as repair ans maintenance operations for its onboard systems; carries out preparation of the spacecraft and its experimental equipment for the next cycle of free flight. During the free-flight phase, Oka-T will provide a much lower vibration level and better micro-gravity condition than the laboratory modules on the ISS.

In order to satisfy the conditions required for free flight, special measures are foreseen to build OKA-T onboard systems (motion control, power supply) and reduce vibrations caused by onboard devices, as well as create zones of high vacuum via special protective shield and airlock which makes it possible to move experimental equipment with samples in this zone and, subsequently, to remove the equipment with samples from it.

The satellite was planned to be launched from the new Vostochny cosmodrome on a Soyuz-2-1b in 2018. Oka-T was cancelled in April 2015 after a crewed Soyuz-MS mission was scheduled for launch from Vostochny.