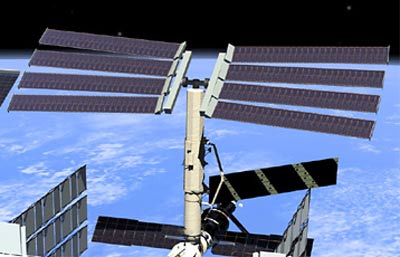 The SPP (Science Power Platform) was a planned Russian element of the International space station ISS that would have provided additional power for the ISS as well as roll axis control capability for the orbital facility.

Originally designed for the cancelled Mir-2 station, it was to be delivered by a Zenit-2 launch vehicle. Later it was shifted to a Shuttle launch in a tradeoff agreement with NASA. It consisted of a pressurised section and a truss carrying solar arays. The european ERA (European Robotic Arm) robotic arm was to be fitted to SPP too.

With the cancellation of SPP, the ERA was transferred to the MLM module, while the partially completed pressurised section will be modified into the DCM (Docking Cargo Module).