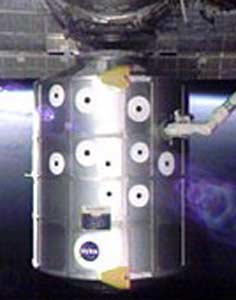 The MPLM (Multi-Purpose Logistics Module) is used on the Shuttle to transport supplies and materials between Earth and the International Space Station (ISS). The MPLM has also been designed to operate in orbit while docked to the ISS to provide active and passive storage and an inhabitable pressurised space for two people.

The complete and complex MPLM system has two main functions: as a carrier it has to fly to the ISS 25 times over 10 years; as a crewed module it must be able to operate in orbit and guarantee protection from meteorites, environmental control, active and passive thermal control, atmospheric control and conditioning, fire detection and extinguishing, distribution of electrical power, commands and data handling.

When the International Space Station (ISS) was redesigned again in 1993, it was decided to expand the original Mini-Pressurised Logistics Module design. The new Multi-Purpose Logistics Module was twice as long and could carry 9000 kg of cargo to ISS. The European Space Agency also became a partner, since Alenia Spazio would use the same pressurised module and some thermal subsystems in the Columbus Orbiting Facility as well. In return, ESA provided three environmental control and life-support system units for use in the Multipurpose Logistics Module. The module carried sixteen International Standard Payload Racks.

MPLM 1 (Leonardo) served as the primary transport module with MPLM 2 (Rafaello) flying only those missions, where Leonardo was not available. Both modules can only carry passive payloads.

MPLM 3 (Donatello) was designed to carry active payloads that require continuous power from construction through to installation on the ISS. As this capability was eventually not needed, Donatello remained unflown and served to provide spare parts for the other two modules.

MPLM 3 (Donatello) is planned to be modified by Lockheed Martin as a ground prototype deep space habitat for NASA's Next Space Technologies for Exploration Partnerships (NextSTEP) habitat study.