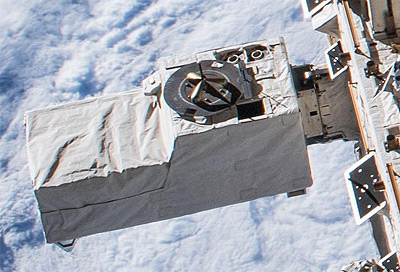 To ascertain the existence of dark matter, electromagnetic waves flying about in space, as well as cosmic rays and high energy gamma rays (both rays hold energy with much higher than these of ultraviolet rays and X-rays) should be closely examined. Therefore, CALET will be installed to the Kibos Exposed Facility (EF) to conduct a long-term observation.

The objectives are to understand the following:

CALET was installed to the Kibos EF. CALET is equipped with the latest detection technology and electronics called CALorimeter to determine the kind and flying directions of particles flying in space.

The CALorimeter has been developed through balloon experiments which can measure electrons and gamma rays of very high energy, protons, and nuclear components. In addition, it measures gamma-ray bursts that emit huge gamma rays in a short time outside our Milky Way galaxy and the influence of solar activity on the Earth environment.

Observation will be carried out for 2-5 years to elucidate high energy space phenomenena on in a wide area of space, from interplanetary space to the outside our Milky Way galaxy.