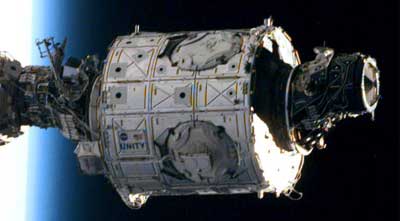 The first U.S.-built component of the International Space Station, a six-sided connecting module and passageway, or node, named Unity, was the primary cargo of Space Shuttle mission STS-88, the first mission dedicated to assembly of the station.

The Unity connecting module, technically referred to as Node 1, layed a foundation for all future U.S. International Space Station modules with six berthing ports, one on each side, to which future modules will be attached. Built by The Boeing Company at a manufacturing facility at the Marshall Space Flight Center in Huntsville, Alabama, Unity is the first of three such connecting modules that will be built for the station. Sometimes referred to as Node 1, the Unity module measures 15 feet in diameter and 18 feet long.

Carried to orbit aboard the Space Shuttle Endeavour, Unity was mated with the already orbiting Zarya control module, or Functional Cargo Block (Russian acronym FGB), a U.S.-funded and Russian-built component that will have been launched earlier aboard a Russian rocket from Kazakstan. In addition to connecting to the Zarya module, Unity eventually will provide attachment points for the U.S. laboratory module; Node 3; an early exterior framework, or truss for the station; an airlock; and a multi-windowed cupola.

More than 50,000 mechanical items, 216 lines to carry fluids and gases, and 121 internal and external electrical cables using six miles of wire were installed in the Unity node. The detailed and complex hardware installation required more than 1,800 drawings. The node is made of aluminum.

Two conical docking adapters will be attached to each end of Unity prior to its launch aboard Endeavour. The adapters, called pressurized mating adapters (PMAs), allow the docking systems used by the Space Shuttle and by Russian modules to attach to the node's hatches and berthing mechanisms. One of the conical adapters will attach Unity to the Zarya, while the other will serve as a docking port for the Space Shuttle. The Unity node with the two mating adapters attached, the configuration it will be in for launch, is about 36 feet long and weighs about 25,600 pounds.

Attached to the exterior of one of the pressurized mating adapters are computers, or multiplexer-demultiplexers (MDMs), which will provide early command and control of the Unity node. Unity also will be outfitted with an early communications system that will allow data, voice and low data rate video with Mission Control, Houston, to supplement Russian communications systems during the early station assembly activities.

Node-2 had been developed as the structural test article for Node-1 and had been intended to be used later in the assembly of the ISS, but due to changed plans with ESA, that ESA would provide both a Node-2 and Node-3 based on the MPLM design, which was superior to the Node's design, it was cancelled. The structure of the US Node-2 was then available for destructive testing or other uses.