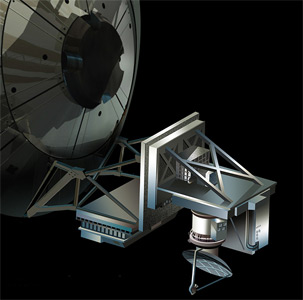 The RapidScat (Rapid Scatterometer) is a complete stand-alone payload built using the spare engineering model of the QuikScat flight instrument (SeaWinds), with additional elements added to accommodate installation and operation on the International Space Station (ISS).

The ISS-RapidScat instrument is a speedy and cost-effective replacement for NASA's QuikScat satellite, which monitored ocean winds to provide essential measurements used in weather predictions, including hurricane monitoring. So essential were QuikScat's measurements that when the satellite stopped collecting wind data in late 2009, NASA was challenged to quickly and cost-effectively conceive of a replacement. NASA's Jet Propulsion Laboratory and the agency's station program came up with a solution that uses the framework of the International Space Station and reuses hardware originally built to test parts of QuikScat to create an instrument for a fraction of the cost and time it would take to build and launch a new satellite.

The ISS RapidScat instrument is a pencil beam scatterometer whose hardware consists of the SeaWinds scatterometers engineering model hardware with the exception of the antenna sub-system and digital interface to the ISS Columbus module. The instrument will be in operation for 24 months after installation. Due to accommodation constraints of the launch vehicle and the ISS mounting site the antenna diameter is set to 0.75 m, which is slightly smaller than that of QuikScat (1 m).

The nominal altitude of the ISS orbit during the time of RapidScat operations will be changing, depending on the reboost schedule, between 375 km and 435 km, this is approximately half the orbit altitude of QuikSCAT. The station attitude will also vary over the course of the mission, particularly the pitch bias with which the ISS flies will vary depending on the combinations of visiting vehicles and their berthing sites. Both the attitude and altitude variations of the ISS require timing modifications to the engineering hardware that will be accomplished before launch as well as changes in day-to-day operations of the radar.

RapidScat was transported by the Dragon CRS-4 transporter to the ISS in September 2014 and was mounted on the nadir bracket on the COF (Columbus) module.

RapidScat lost power on 19 August 2016 when an electrical power distribution system in the stations Columbus module malfunctioned. As space station controllers worked to restore power to RapidScat and several other affected instruments later that day, an electrical outlet overloaded. While controllers were able to restore power to the other instruments, they were unable to power up RapidScat again, making the last attempt to do so 17 October 2016. On 28 November 2016, RapidScat was formally terminated. It will not be replaced with NASA using data from the Indian SCATSAT 1 instead.