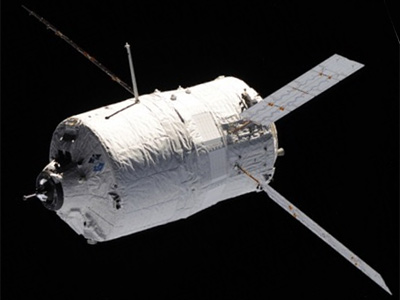 The ATV (Autonomous Transfer Vehicle) is an uncrewed, non-reusable cargo spacecraft for delivering supplies an fuel to the International Space Station.

Every 12 months the 20-tons ATV will haul 7.5 tons of cargo from its Kourou launch site in French Guiana to the Station 400 km above the Earth. An on board high precision navigation system will guide the ATV on a rendezvous trajectory towards ISS, where it will automatically dock with the Station's Russian service module. The ATV will remain there as a pressurized and integral part of the Station for up to six months until its final mission: a fiery one-way trip into the Earth's atmosphere to dispose of up to 6.5 tons of Station waste.

The exterior is an eggshell-coloured cylinder, 10.3 meters long and 4.5 meters in diameter. The details of the ATV's structure are covered with an insulating foil layer on top of anti-meteorite panels. The X-shaped extended solar arrays provide power. Inside, the ATV consists of two modules, the propulsion spacecraft and the integrated cargo carrier which docks with the ISS.

The 45 m³-pressurized section has room for up to eight standard racks which are loaded with modular storage cargo elements. The integrated cargo carrier also holds several tanks, containing up to 840 kg of drinking water, 860 kg of refuelling propellant for the Station's own propulsion system and 100 kg of air (oxygen and nitrogen). The ‘nose' of the cargo section contains the Russian-made docking equipment and various kinds of rendezvous sensors.

The ATV's spacecraft module navigates with four main engines (490 Newton) plus 28 smaller thrusters (220 N) for attitude control. After docking, the ATV can perform ISS attitude control, debris avoidance manoeuvres and boost the Station's orbit to overcome the effects of atmospheric drag. In order to perform this last manoeuvre the ATV uses up to 4.7 tons of propellant.

A typical ATV mission will begin when the craft is launched into a 300 km orbit atop an Ariane-5ES from the French Guiana equatorial launch site. Under the responsibility of the European control centre in Toulouse (France), the ATV separates from Ariane and navigation systems are activated. Thrusters are fired to boost the ATV into the transfer orbit to the ISS.

After three days of orbit adjustments, the ATV will come in sight of the ISS and will start relative navigation from about 30 km behind and 5 km below the Station. The cargo ship's computers begin final approach manoeuvres over the next two orbits, closing with ISS at walking pace.

The actual docking will be fully automatic. If there are any last-minute problems, either the ATV's computers or the Station's crew can trigger a pre-programmed sequence of anti-collision manoeuvres, which is fully independent of the main navigation system. This back-up system adds a full level of safety, which could be compared to an airbag in a car.

Once its re-supply mission is accomplished, the ATV, filled with waste, will be closed by the crew and automatically separated. Its thrusters will use their remaining fuel to de-orbit the spacecraft to perform a controlled destructive re-entry high above the Pacific Ocean.