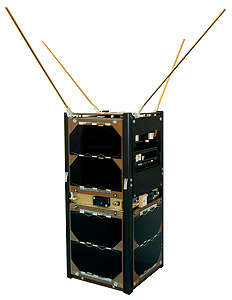 GOMSpace's GOMX-2 is 2U CubeSat to evaluate several components in space.

The satellite is intended to test a de-orbit system designed by Aalborg University. Also on board is a optical communications experiment from the National University of Singapore. The mission will also flight qualify a new highspeed UHF transceiver and SDR receiver from a new generation Aalborg University team.

GOMX 2 was launched on October 2014 onboard of the Cygnus CRS-3 cargo vehicle towards the International Space Station to be deployed from the Japanese airlock. The launch failed shortly after lift off. The satellite was recovered undamaged from the wreckage and was returned to GOMSpace.