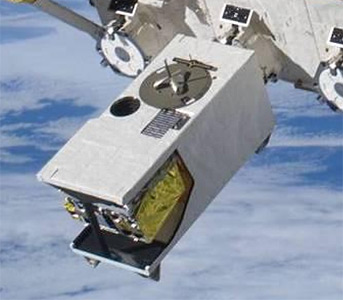 The objective of HREP-HICO (Hyperspectral Imager for the Coastal Ocean) is to launch and operate a rapid-development, cost-constrained visible and near-infrared (VNIR) Maritime Hyperspectral Imaging (MHSI) system, to demonstrate the detection, identification and quantification of littoral (coast of an ocean or sea) and terrestrial geophysical features. The instrumentation monitors wavelengths from the visible to the near-infrared (VNIR) with a ground spatial resolution of about 95 m2 per pixel. HREP-HICO validates the performance of MHSI technology in space and demonstrates its effectiveness in meeting Department of Defense (DoD) requirements. HREP-HICO provides an initial data stream to introduce new Department of Defense (DoD) users to MHSI data products and develop data dissemination channels. Hyperspectral image data from HREP-HICO also has significant application in the civil remote sensing community. Extensive experience with airborne hyperspectral image data has demonstrated its utility for land use and land cover, vegetation type, vegetation stress and health, and crop yield. In the ocean, bathymetry (depth measurement of large bodies of water), bottom type, and water optical properties are of great interest to the National Oceanic and Atmospheric Administration (NOAA) and other agencies with marine responsibilities. The detector could also have uses in the determination of the environmental impact of natural and unnatural disasters. These applications are of immediate interest to the United States Departments of Agriculture, Commerce, Homeland Security, and Interior, as well as the National Aeronautics and Space Administration (NASA).

The HREP-RAIDS (Remote Atmospheric and Ionospheric Detection System) is an experiment designed to perform a comprehensive study of naturally occurring airglow emissions in the upper atmosphere. HREP-RAIDS observations are used to develop and test techniques for remote sensing of the neutral atmosphere and ionosphere on a global scale. HREP-RAIDS is an array of eight optical instruments covering the wavelength region 55 - 870 nanometers and measures the vertical structure of the atmosphere. The experiment scans or images the limb of the Earth to measure profiles of airglow from major ionospheric and neutral atmospheric species in the upper atmosphere. HREP-RAIDS measurements are used to determine the composition and temperature of the thermosphere and ionosphere. HREP-RAIDS tests new techniques for atmospheric remote sensing and looks for signs of global change.

HREP was launched to the International Space Station on 11 September 2009, with HTV 1 on the H-2B-304 launch vehicle from Tanegashima Space Center in Japan. It was attached to a port of the Exposed Facility of Kibo (Japanese Experiment Module) on the station.

HREP was removed from the ISS and deorbited in the trunk of Dragon CRS-15 on 3 August 2018.