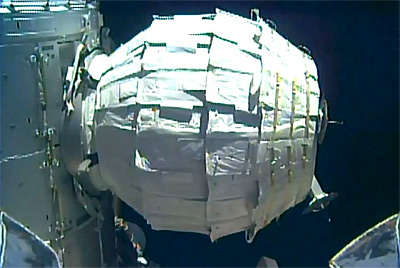 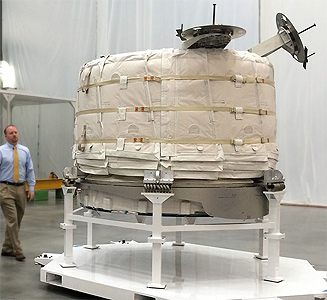 BEAM (Bigelow Expandable Activity Module) is a technology demonstration for the inflatable space station structure as a prototype of the larger modules and stations planned by Bigelow Aerospace. It will be attached to the ISS.

BEAM is based on the small Genesis pathfinder modules tested on independent flights.

The BEAM, which will weigh approximately 1,360 kg, will travel within the unpressurized cargo hold of the Dragon CRS-8 capsule. After the Dragon has docked with the Station, the Canadarm-2 will remove the BEAM from the capsule trunk and connect it to the aft port of Node 3 (Tranquility). Upon successfully transferring and docking the BEAM to Node 3, an ISS astronaut will activate the deployment sequence, and the BEAM will expand on to its full length of roughly 4 meters with a diameter of nearly 3 meters. Subsequent completion of this deployment process, an ISS mew member will enter the BEAM, becoming the first astronaut to step inside an expandable habitat system.

The BEAM will remain aboard the ISS for a nominal period of two years. During this time, astronauts will monitor the environment inside the BEAM, recording a variety of data including temperature, pressure and radiation.

The first attempt to inflate BEAM on 26 May 2016 did not go as planned and was halted. A new attempt was successfully conducted on 28 May after anaylsis of the data.

In December 2017, NASA and Bigelow have reached agreement to extend the life of the privately-owned module. For a minimum of three more years, BEAM will be a more operational element of the station used in crew activities and onboard storage, allowing time to gather more data on the technologys structural integrity, thermal stability, and resistance to space debris, radiation and microbial growth.

After Bigelow's shutdown, the ownership of BEAM was transferred in December 2021 to NASA's Johnson Space Center.