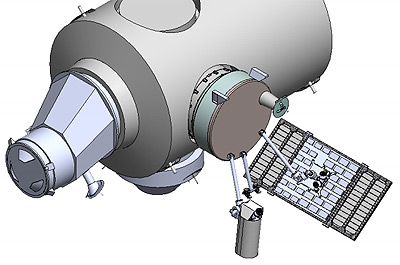 The LUNA module (Lightweight Urthecast NanoRacks Alcove) was a planned small module for the ISS, which was to provides experimental space for NanoRacks and earth observation instruments for UrtheCast.

The module was to be accessible from a CBM berthing mechanism on the Node-3 module, allowing astronauts to set up electronics and service the system. The pressurized volume inside the module was to host experiments for NanoRacks.

The UrtheCast earth observation payload consisted of a dual-mode high resolution Camera (video and pushbroom focal planes) and a dual-band SAR (radar) payload (L-band and X-band), which are mounted on high-precision 3-axis gimbals.

LUNA was to be launched in late 2017 on a Dragon resupply capsule. It was to be installed on Node-3 on the aft port formerly used by the BEAM module.

Urthecast cancelled the LUNA effort in November 2015 to focus on their planned free-flying satellites.