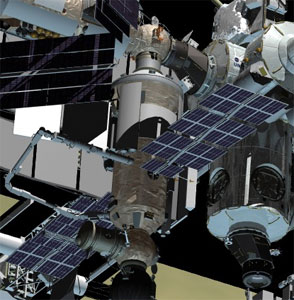 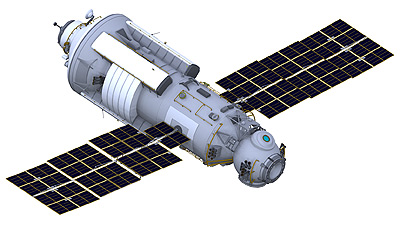 MLM-U (Mnogozelewoi Laboratorny Modul - Usovershenstvovanny, Multipurpose Laboratory Module - Upgrade) is a multipurpose module of the Russian segment of the International space station ISS. MLM is built using the module, which was once slated to become the UDM (Universal Docking Module), which was in turn modified from the FGB-2 module, which was the back up of the central FGB module.

The MLM module will accommodate both service systems for the Russian segment of the ISS and scientific payloads. The European-built ERA manipulator and the DMS-R multifunction computer will also be installed onboard.

The effort to build FGB 2 as a back-up for FGB 1 dates back to 1995 when the top managers of the Khrunichev Space Center decided to engage in this project using the Center's budget, almost in parallel with creating the Functional Cargo Module Zarya, the first element of the ISS. In compliance with Rosaviacosmos Decision dated 16 February 2004, on “Implementation of abbreviated ISS configuration” as well as the Federal Space Agency Decision dated 20 July 2004, on “Multipurpose Lab Module (MLM) implementation process using the FGB 2 backlog”, the MLM was included in the Russian Segment Configuration on the nadir port of Zarya Module.

The target date for the completion of MLM as defined in the MLM Program Schedule was late 2007. At present, the MLM's detailed profile has been finalized based on streamlined design parameters proceeding from the need to reduce the cost and time to be spent on building the Russian Segment of the ISS while making the most of the hardware backlog and potential investment from foreign partners and commercial customers. Following final definition of the MLM Design Specification within the abbreviated Russian Segment configuration of the ISS, it will take two years to implement modifications. As per the ISS RS abbreviated configuration the FGB 2-based MLM is to support further ISS RS deployment providing docking ports to transportation vehicles and research modules as well as accommodating payloads, providing stowage capability, etc.

The MLM should be capable of supporting commercial projects to the degree possible so as to outsource off-budget funding including investments to be used to complete and commission the module.

Following requirements were set for the FGB 2-based MLM as derived from the input data:

Originally scheduled for 2009, the launch of the MLM module has been delayed several times. In 2013 a leak in the propulsion system was found, postponing the launch to 2015, then to mid 2017. In June 2016, it was again delayed by six months to December 2017. At the same time, the designation was changed to MLM-U, hinting at upgrades being made to the module, possibly to enable it to act as the core of a separated free-flying Russian segment. Further issues delayed it to November 2019. Contamination in the propulsion system was discovered, and in March 2019 it was decided to replace the contaminated tanks of the propulsion system by new ones . Launch has now slipped to July 2021.

After a successful launch in July 2021, several problems occurred. Some of them were caused by loss of telemetry, but the main issue was a serious problem with the main propulsion system. The initial orbiting maneuver was delayed by 24 hours. On 22 July 2021, the Nauka Multipurpose Module Flight Control Group specialists at Mission Control Moscow conducted two correction maneuvers of the module that had launched to the International Space Station the previous day. The first maneuver took place at 15:07 UTC with the module engines burn for 17.23 seconds giving an impulse of 1 m/s. The second burn for 250.04 seconds took place at 17:19 UTC with an impulse of 14.59 m/s. By then, the telemetry confirmed the module propulsion unit's operability. Additional burns for further orbit correction were scheduled for 23 July 2021. On 23 July 2021, Nauka conducted the third and fourth burn in its approach. Because of the burn duration and Nauka's location in orbit two more burns were needed to get it back into plane. As parts of the fuel were mixed with pressurized gasses due to the propulsion issue, only enough fuel for a single docking attempt was left. Docking with ISS occured on 29 July 2021.