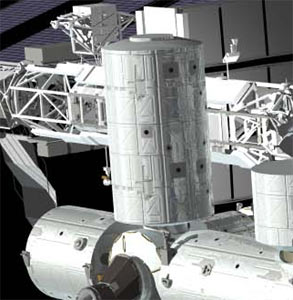 The Centrifuge Accommodation Module (CAM) was planed as a laboratory module for the ISS dedicated to gravitational biology research. The CAM was scheduled for launch aboard a Space Shuttle on Utilization Flight 7 (ISS UF-7). Two main lines of research investigations - one fundamental, the other applied - were to be addressed by research performed in the CAM. First, the fundamental question of what role(s) gravity has in the development of organisms from the cellular level up to that of an entire individual organism. The applied research performed within the CAM has to do with the gravity levels and exposure times are required for the health, safety, and productivity of humans during long term space travel - such as to Mars. This will be important in designing future spacecraft.

The Centrifuge Facility was originally scheduled for both development and construction in the U.S. However, in 1998, an agreement was reached whereby Japan (NASDA) would build the Centrifuge Rotor and the CAM at its own expense to offset the cost to Japan of launching the Japanese Experiment Module (JEM) aboard a Space Shuttle. The requirements for the facility are set by the U.S. at NASA ARC's Station Biological Research Project. In addition the Life Sciences Glovebox, Habitat Holding rack, and other hardware are being provided by the U.S. The CAM and its components will be operated as a U.S. facility once in space.

The CAM was designed to house the Centrifuge Facility and is 8.9 meters long, 4.4 meters in diameter, and will weigh 10 tons at launch. The CAM has 14 rack locations, 4 of which house experimental hardware with the remaining 10 dedicated to stowage. The centrifuge rotor is located in the module's endcone. The CAM was to be launched aboard a Space Shuttle on mission ISS-UF7 (Utilization Flight-7).

The CAM contains a 2.5 m diameter Centrifuge Rotor (CR) mounted in the end cone of the module. The CR is the core element within a large suite of hardware to be housed in the CAM which includes a Life Sciences Glovebox (LSG) (1 rack), a Habitat Holding Rack (HHR) (2 racks) and a Cryo-Freezer. In addition, rack location locations are provided for passive stowage racks: one passive system rack for gravitational biology research and 8 racks for all other passive stowage.

CAM was cancelled in the aftermath of the Columbia disaster.

The prime feature of the CAM is a 2.5 m diameter Centrifuge Rotor (CR) capable of providing artificial gravity levels ranging from 0.001 G to 2G. At 1875 kg, this rotor is the largest centrifuge, by far, ever flown in space. The centrifuge is designed to house microorganisms, plants, and small animals up to the size of rats. Up to 8 habitats can be accommodated at a given time. The centrifuge allows research to be done on specimens across a wide range of G levels allowing the various threshold levels of certain phenomena to be revealed.

Two major design hurdles faced the CR designers - sending various utilities across a rotating interface and isolating vibroacoustic disturbances so as to not affect the rest of the ISS. Slip Ring Technology is used in the operation of the mechanical interface that bridges the rotating portion and the static portion of the CR. This interface needs to be able to provide the spinning CR with air, liquid, and electrical supplies and to receive video and data signals from the CR.

Active Balancing Technology is employed to maintain a stable rotation profile even as the specimens within the various habitats cause "jitter". The CR also employs Precision Vibration Isolation Technology to prevent operation of the CR from disturbing the overall ISS microgravity environment. Overall, the CR has the ability to control the centrifugal acceleration within 0.01g of a desired acceleration.

The Life Sciences Glovebox (LSG) provides an enclosed work environment within which biological specimens and chemicals can be used while remaining safely out of contact with the rest of the ISS. The LSG occupies one rack location and was designed based upon experience gained by other gloveboxes flown on previous Spacelab missions aboard the Space Shuttle. The LSG has a 10 year design life.