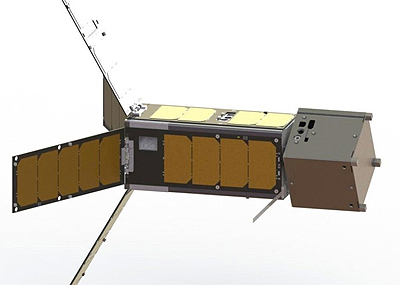 The CubeSat comprises a 2U spacecraft bus with an Attitude Determination and Control System (ADCS), avionics, power, and communications, and a 1U spinning radiometer payload with highly integrated, compact microwave receiver electronics.

The payload is a multispectral passive microwave radiometer that collects observations in the 118 GHz range, complementing existing on-orbit radiometer capability delivered by larger systems that operate in other spectral bands. MicroMAS will provide unprecedented observations of the dynamics of hurricane and other large storm systems with significantly improved revisit times and comparable resolution to large polar-orbiting satellites. The implementation of the atmospheric science mission using low-cost commercial components and the standard CubeSat launch vehicle interface will demonstrate a transformative satellite architecture for future meteorological satellites. The MicroMAS mission enables the persistent collection of data from multiple low-cost distributed platforms to greatly improve operational numerical weather predictions, climate records, and other scientific objectives.

In order to effectively collect data with the radiometer sensor, the spacecraft must simultaneously sweep the radiometer field of view perpendicular to the groundtrack while maintaining a 3-axis stabilized orientation fixed in the local vertical local horizontal frame. Analysis determined that it would not be possible to spin the entire satellite and simultaneously maintain the LVLH orientation. This attitude control problem led to a novel design solution to implement a dual-spinner design on the CubeSat architecture, in which a custom designed spinner assembly, would join the rotating payload module to the rest of the satellite.

MicroMAS was launched on board of Cygnus CRS-2 to the International Space Station to be deployed from the Japanese airlock. It was deployed on 4 March 2015.