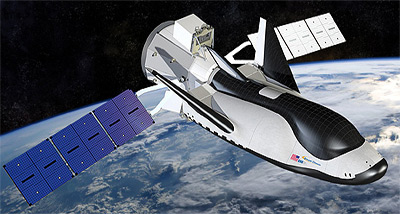 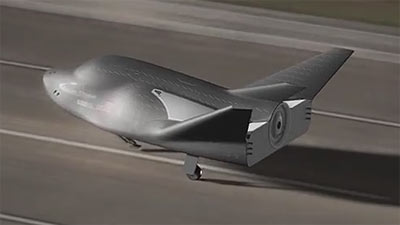 The Dream Chaser Cargo (DCCS) is a planned uncrewed orbital lifting-body space plane being developed by Sierra Nevada Corporation (SNC). Dream Chaser Cargo is based on the crewed Dream Chaser vehicle and is designed to ferry supplies to and from ISS. The vehicle would launch vertically on an Atlas-5(552) or alternatively on an Ariane-5ES and land horizontally on conventional runways.

Differing from the crewed version, it will feature a expendable cargo and docking module called Shooting Star, which can also carry external unpressurized payloads. Two deployable solar arrays on this module provide power. DCCS could carry 5500 kilograms of cargo up to the space station on each flight and return 1750 kg to Earth. Up to 4750 kg could be disposed of via the docking module on every mission's return leg. Shooting Star can also be used as a free-flying mini space station. Under a contract from Defense Innovation Unit (DIU), SNC is modifing its Shooting Star space transport vehicle design as an Unmanned Orbital Outpost.

The reusable Dream Chaser is based on the NASA developed HL-20 lifting body shape. The typical Dream Chaser Cargo would be berthed on one of the node modules using the stations robitc arm. Alternatively for docking with the space station, Dream Chaser could be fitted with an rear mounted APAS docking adaptor.

Under the CRS-2 selction in January 2015 Dream Chaser Cargo was selected for a minimum of six missions. In July 2017, Atlas-5(552)¹ launch vehicles were contracted for the first two launches in 2020 and 2021. In August 2019, the launch vehicle was changed to Vulcan Centaur VC4L with Atlas being the back-up. The maiden launch was delayed due to the COVID-19 pandemic to 2022.