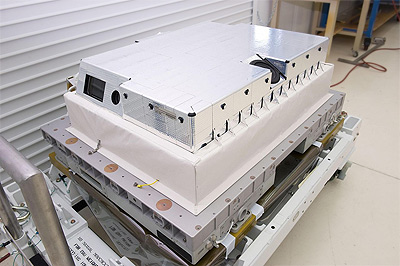 The HDEV (High Definition Earth Viewing) is a payload package on the International Space Station (ISS), composed of four commercial high definition video cameras which have been built to record video of the Earth from multiple angles by having them mounted on the International Space Station. The cameras stream live video of Earth to be viewed online.

The HDEV system was developed by engineers at the Johnson Space Center in Houston, Texas, with high school students also helped design some of the cameras' components.

The HDEV primary objective is to validate the space-based performance of the cameras in a variety of operating modes to exercise and demonstrate the features and longevity of the COTS equipment for future ISS Program usage. The forward facing camera is a Hitachi GV-HD30, the nadir pointing camera is a Toshiba IK-HR1s and the two aft facing cameras are a Sony FCB-EH4300 and a Panasonic AGHMC150. All cameras have a fixed zoom and do not require any complex commanding. All HDEV Hardware is enclosed in the housing of the instrument containing dry Nitrogen at atmospheric pressure, allowing components that are not certified for use in vacuum to be utilized. High quality camera windows are used in the enclosure.

HDEC was transported by the Dragon CRS-3 transporter to the ISS in April 2014. HDEV was installed on the Columbus  External Payload Facility.

HDEC was removed in May 2020 from Columbus and transfered to Cygnus CRS-13's passive Flight Releasable Attachment Mechanism (FRAM) for disposal.