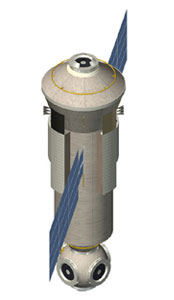 UDM (Universal Docking Module, USM, Universalny Stikovochny Modul') was a module for the ISS complex, which was to be the hub for a number of Russian modules.

USM was to have a unit to recycle of water from urine, a bath chamber and power management facilities. It was to have tanks for 5 t of fuel and five docking ports for crew vehicles, automatic supply ships and scientific modules.

To the radial docking ports following modules were planned to be docked:

When the Life Support Module was cancelled, some of the LSM equipment was to be integrated with UDM.

Originally it was considered converting the back-up FGB-2 into USM, but this was found to be to complicated. In the last phases of the UDM program, when the number of modules to be docked has been reduced, this conversation was considered again. Eventually FGB-2 was converted to MLM-U (Nauka).