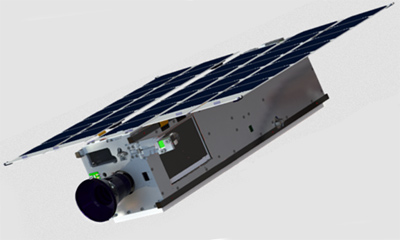 Planetary Resources' Arkyd 3 or A3 is a technology demonstration nanosatellite based on the triple CubeSat form factor for the planned Arkyd-100 asteroid prospecting astronomy satellites.

The satellite will test systems for the Arkyd-100 satellites, but does not feature a telescope.

Arkyd 3 was to be transported to the International Space Station and to be deployed from there in October 2014. The launch failed shortly after lift off.

The reflight Arkyd 3R was successfully launched towards the ISS onbaord of Dragon CRS-6. It was deployed on 15 July 2015.