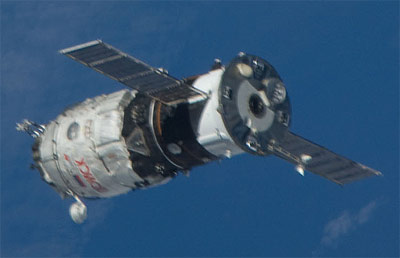 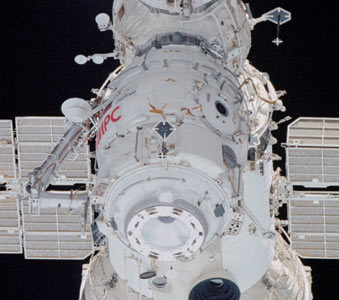 The 16-foot-long, 8,000-pound Pirs (Docking Compartment 1, DC 1) is attached to the bottom, Earth-facing port of the Zvezda Service Module at the ISS. It docked to the space station on Sept. 16, 2001 and was configured during three spacewalks by the Expedition Three crew. Pirs, also known as DC-1, launched Sept. 14, 2001, as ISS Assembly Mission 4R on a Russian Soyuz-U rocket.

The Docking Compartment has two primary functions. It serves as a docking port for the docking of transport and cargo vehicles to the space station, and as an airlock for the performance of spacewalks by two station crewmembers using Russian Orlan spacesuits. In addition, the Docking Compartment can transport fuel from the fuel tanks of a docked Progress resupply vehicle to either the Zvezda Service Module Integrated Propulsion System or the Zarya Functional Cargo Block Propulsion System. It can also transfer propellant from the Zvezda and Zarya to the propulsion system of docked vehicles - Soyuz and Progress. The docking compartment's lifetime as part of the ISS is five years.

Two more Russian docking compartments were originally planned for the space station. The Universal Docking Module (UDM) was to replace Pirs, and Pirs was to be separated from the station and re-enter the Earth's atmosphere and disintegrate. Another docking compartment known as DC-2 was also planned to launch to the station. DC 2 was silghly modified and named Poisk (MRM 2, Mini Research Module 2) or MIM 2 (Maliy Issledovatel'ny Modul' 2).

Under current plans, the DC 1 will be discarded, when the MLM will take the current location of DC 1. The MRM 2 will replace the function of DC 1.