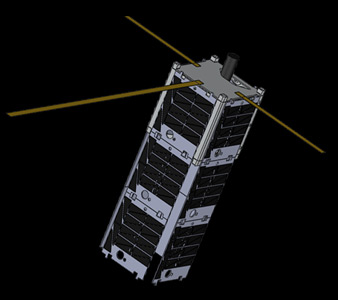 Lambdasat (Λ-sat) is a Greek 1U-CubeSat. It was built by Lambda Team, an international group of Greek scientists and students based in Silicon Valley (San Jose), CA, USA.

Lambdasat is a 1U Cubesat with deployable solar arrays, which unfold to a 3U envelope for increased power. Lambdasat carries four technologies eperiments to be demonstrated during flight.

It carries an experiment, which measures the radiation effects on the graphene material in real environment in Low Earth Orbit (LEO). It also carries an experimental AIS (Automatic Identification System) receiver for tracking all the vessels inside its footprint around the globe.

The communication consist of an Iridium Short Burst Data (SBD) modem and makes use of the Iridium constellation. In addition one UHF transmitter and one UHF receiver will supplement the uplinks and downlinks of the satellite. All the electronics above are integrated and operated by one power system and a main computer which have been designed and built for Lambdasat.

Lambdasat was launched on board of Cygnus CRS-2 to the International Space Station to be deployed from the Japanese airlock. It was deployed on 4 March 2015. About 30 days after deployment, Lambdasat will de-orbit.