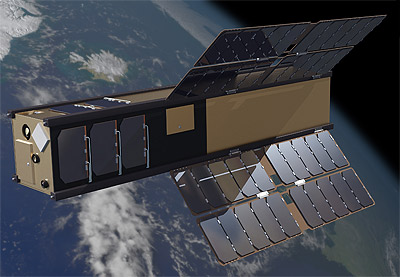 The DAILI (Daily Atmospheric Ionospheric Limb Imager) mission is a scientific investigation mission that studies dynamic changes in Earth's neutral/ionosphere density in the ~140 km - 290 km altitude region. The satellite built by The Aerospace Corporationis a 1×6U CubeSat.

The wide spatial and temporal distribution of the data provided by DAILI over the course of its mission will improve the accuracy of operational models for both the neutral density and the ionosphere, and will help further the study of wave propagation and transport processes in the lower thermosphere.

The DAILI mission will study the atmosphere at an altitude range of about 140 to 290 kilometers. In this region, measurements are scarce, and density and composition are highly variable. This variability affects the plasma and atmospheric structure at higher orbital altitudes. DAILI will provide data for atmospheric models, important for applications such as calculating the precise orbits of satellites and understanding the propagation of radio signals.

This technique was validated by previous measurements made by Aerospaces photometer portion of the Remote Atmosphere/Ionosphere Detection Sensor (RAIDS), which was deployed on the International Space Station. DAILI provides the same capability as RAIDS in a miniature form.

The linear six-unit (10x10x60 cm) (1×6U) DAILI payload consists of a two-channel photometer, occupying about 2 U, that images the Earth's limb over a 6 degree FOV onto different regions of a single CCD, each color channel occupying about 180 × 180 pixels. At a nominal limb distance of 2300 km the FOV is nominally from 140 to 290 km in altitude over a 150 km horizontal span. A sunshade, which occupies about 3U exterior to the optics, excludes scattered light from the Sun, the hard Earth and low altitude clouds. The Aerospace CubeSat bus takes up the remaining space. The bus satisfies all power, thermal and pointing requirements for camera operation, including a star sensor and attitude control system capable of payload pointing to better than 0.1 degree. This pointing system will allow higher or lower altitudes than the nominal range to be observed, if desired.

DAILI will be designed, built, and flown by Aerospace and is scheduled to begin its one-year flight mission in 2020. It is proposed that DAILI be launched from the ISS, using the NanoRacks CubeSat Deployer, giving a nominal 51-degree inclination orbit at 400 km altitude.