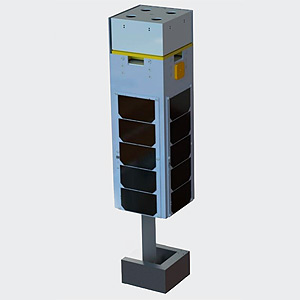 The PATCOOL CubeSat is designed to test the thermal samples when completely isolated from all sources of heat transfer aside from the Sun and deep space. A secondary objective is to test the ADAMUS Laboratorys drag de-orbit device (D3), which can modulate the drag area of a host CubeSat while maintaining passive 3-axis stabilization using aerodynamic and gravity gradient torques. The PATCOOL design will be manufactured completely in-house, but off the shelf components will be purchased from space heritage companies such as AAC Clyde Space, CubeSpace, BeagleBoard, and others, whenever possible. The PATCOOL design is comprised of the payload housing, CubeSat structure, deployables, solar panels, and avionics.

To accurately portray the Suns affects on the samples, vehicle is kept zenith custom ADCS (attitude determination and pointing using a custom ADCS combining a single D3 boom with a tipmass and a magnetorquers for passive 3-axis stabilization. The PATCOOL software requirements can be considered a subset of D3.