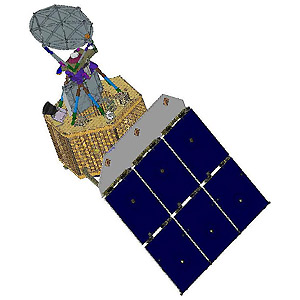 The COWVR payload being developed by the Jet Propulsion Lab (JPL) for the Space and Missile Systems Center (SMC) Weather Directorate which would address the need for ocean surface vector wind data, which currently comes from the U.S. Naval Research Laboratorys Windsat payload on the Coriolis (P98-2) satellite, which launched in 2003 and is well beyond its expected design life.

NASAs Jet Propulsion Laboratory built COWVRs sensor, which improves upon the design of the Advanced Microwave Radiometer flown on the U.S./European Jason-2 and Jason-3 satellites.

The bus was built for the ORS 2 experimental radar satellite, which was planned for a launch in 2015, but was at the time not fully funded. Funds were available for the mission are sufficient to complete the MSV satellite bus, which was delivered in 2014, and to test it with the payload. It has since been put into storage and the MSV bus is planned to be launched with another payload. The MSV bus will be slightly modified and fitted with the COWVR Compact Ocean Wind Vector Radiometer instead of the radar payload. The solar arrays and the payload mounting will be modified for the new mission.

The satellite was to fly in 2018 on a shared multi-satellite launch on a Falcon-9 v1.2 (Block 5) rocket. In May 2018, the plan to launch the satellite was cancelled due to unspecified technical issues with the spacecrafts bus. Space RCO will now demonstrate COWVR on the STP-H8 payload attached to the International Space Station (ISS).