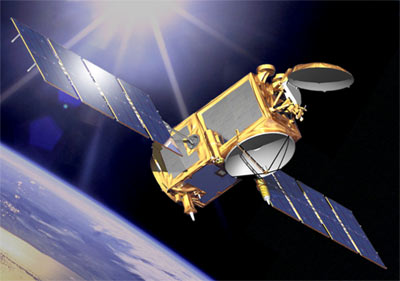 The Jason 2 or OSTM (Ocean Surface Topography Mission) is a follow-on to the Jason 1 mission.

Jason 2 is a quadripartite program organized by CNES, NASA, NOAA and Eumetsat. Based on high-precision oceanographic altimetry, it introduced new data processing services supplied by Eumetsat, such as sea forecasts for ships, and coupling of this data with weather forecasts.

The 40-million euro CNES contract covers manufacture of the Poseidon-3 altimeter, the primary instrument for the mission, plus a payload module to manage all the instruments, and the assembly, integration and testing of the satellite. The Proteus platform used for the satellite is covered by a contract for five platforms that Alcatel Space has already received from CNES.

Following instruments are onboard:

Jason 2 carries on its predecessor's mission of monitoring and precisely measuring the oceans. In addition, Jason 2 was originally to incorporate the experimental Wide Swath Ocean Altimeter (WSOA), supplied by NASA, to enhance spatial coverage. The WSOA instrument would have enabled measuring meso-scale phenomena such as vortices inside ocean currents to improve our ocean circulation models. WSO was cancelled in 2005.

Jason 2 was placed into the same orbit at Jason 1, at an altitude of 1,336 km, inclined 66 degrees, to provide virtually complete coverage of ice-free oceans. It weights about 600 kg at launch, and have 550 W of power.

Thales Alenia Space announced to have signed with French Space Agency (CNES), the contract to build the follow on Jason 3 satellite.

The Jason 3 operational oceanographic mission involves a quadripartite collaboration between the two meteorological organizations Eumetsat and NOAA, acting as the leaders of the program, and CNES and its American counterpart NASA.

Jason 3 will allow the continuity of high precision ocean topography measurements beyond TOPEX/Poseidon, Jason 1 and Jason 2, which are now operational in orbit. It will also provide a bridge to an operational mission to enable the continuation of multi-decadal ocean topography measurements. Jason 3 will offer the same ocean measurement accuracy as Jason 2, including near coastal zones, as well as lakes and rivers. CNES has offered a spare Jason 2 platform, already built, for Jason 3.

Based on the Proteus platform, Jason 3 features the Poseidon-3B altimeter, also developed by Thales Alenia Space in Toulouse. The Poseidon-3B dual-frequency altimeter continues to be the key instrument in this spaceborne observation programme. Included in the core mission, Jason 3 will embark the DORIS precise orbit determination system, an Advanced Microwave Radiometer (AMR), a GPS payload (NavstarP), and a Laser Retro-reflector Array (LRA).

The satellite will be placed in the same orbit as Jason 2, at an altitude of 1,336 km with an inclination of 66 degrees, to provide virtually blanket coverage of all ice-free ocean surfaces. Its weight at launch is 553 kg, with 550 W of power and pointing accuracy of 0.15° (half-cone). The launch is planned for December 2014 on a Falcon-9 v1.1 booster for a mission life of 3 years.