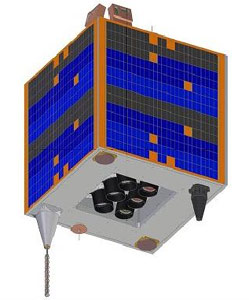 Deimos 1 is a small Earth observation satellite, which was built by SSTL to be launched in 2009. It is part of the Disaster Monitoring Constellation (DMC). The satellite provides imagery for commercial applications, for government use and for rapid-response following disasters.

This satellite provided Deimos with an enhanced version of the DMC wide area imaging system. The new system images 600 km wide swaths of the Earth in three spectral bands at a ground resolution of 22 meters, rather than using the standard 32 m DMC imager. The contract also covered the provision of the ground system to allow operation of the satellite from Valladolid, Spain and it established SSTL as the launch agent for procurement of launch services.

Elecnor Deimos Space in June 2015 announced to sell the Deimos Imaging division and the satellites to UrtheCast.