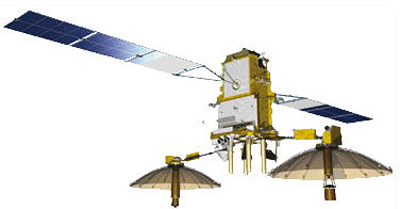 The Luch-5 are the russian follow-on relay satellites, which replace the Luch (Altair) and Luch-2 (Gelios) satellites. Two satellites named Luch 5A and Luch 5B were procured for launches in 2010 and 2011. The smaller satellites are based on the Ekspress-1000 bus and were be launched with a co-passenger on Proton-M Briz-M boosters.

S- and Ku-band data relay channels of each satellite will be linked with receive/transmit points via satellite communications links.

Each data relay satellite is capable of orienting its high-precision antennas towards low-flying space objects so as to catch and track them along their trajectories. Moreover, each of the two user antennas is capable of tracking its own low-flying space object. One antenna will operate in the Ku-band, the other  in the S-band, with the Ku-band channel capacity at 150 Mbit/s and the S-band channel capacity at up to 5 Mbit/s.

Luch-5V was ordered to replace the larger Luch 4 satellite, which has been postponed to 2015 and reduced to an experimental satellite.

The Luch-5A and -5V spacecrafts are also intended to receive COSPAS/SARSAT signals in the P-band and relay them in the L-band to the ground data receiving points. In addition, both will allow collection and transmission of the Planet-S System hydrometeorological data.

In 2020, Luch 5VM was ordered to be launched not later than 2024 to bridge the gap until the Luch 5M satellites become available.