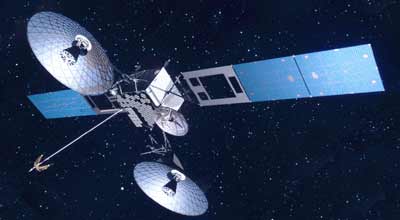 The trio of BSS-601 model spacecraft will replace an aging constellation and serve as the primary means of continuous, high-data-rate communication with the Space Shuttle, with the International Space Station, and with dozens of uncrewed scientific satellites in low-Earth orbit. The new satellites will augment the system's existing S- and Ku-band frequencies by adding Ka-band capability. To support this increased capacity, the contract included the upgrade of the two TDRS stations at White Sands, N.M.

The body-stabilized BSS-601 model on which the new TDRS satellites are based was introduced in 1987 to perform missions demanding flexibility and high power. The series has proved extremely popular and reliable, with more than 84 purchased by customers around the world.

A unique feature that contributed to Boeing's selection is TDRS' innovative springback antenna design. A pair of 15-foot-diameter, flexible mesh antenna reflectors fold up for launch, then spring back into their original cupped circular shape on orbit. These steerable, single-access antennas can simultaneously transmit and receive at S-band and either Ku- or Ka-band, supporting dual independent two-way communication. The selection of Ku- or Ka-band communications is done on the ground. Receive data rates are 300 megabits/second at Ku- and Ka-band, and 6 Mbps at S-band. The spacecraft carries additional capability for Ka-band receive rates of up to 800 Mbps. Transmit data rates are 25 Mbps for Ku- and Ka-band, and 300 kilobits/second for S-band.

In addition, an S-band phased array antenna can receive signals from five spacecraft at once, while transmitting to one.

TDRS 9 lost pressure in one of its four onboard fuel tanks four days after launch. Satellite controllers at BSS since then re-routed fuel tank pressurant around a blocked valve and conducted a series of engine burns to raise TDRS-9's orbit to 35,800 km. The last burn, which put the spacecraft in its final geosynchronous orbit, was performed on 30 September 2002.