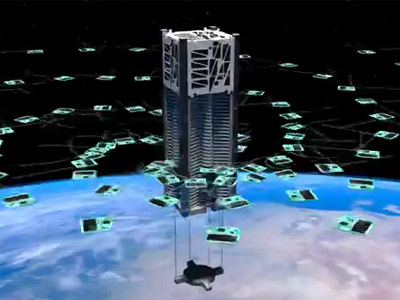 ChipSats like the Sprite represent a disruptive new space technology that will both open space access to hobbyists and students and enable new types of science missions. A significant portion of the KickSat mission has been financed by over 300 individual sponsors through the crowd-source funding website Kickstarter.

The Sprites are a tiny spacecraft that includes power, sensor, and communication systems on a printed circuit board measuring 3.5 by 3.5 cm with a thickness of 2.5 mm and a mass of about 5 grams. It is intended as a general-purpose sensor platform for micro-electro-mechanical (MEMS) or other chip-scale sensors with the ability to downlink data to ground stations from LEO.

KickSat was a 3U CubeSat being built to carry and deploy up to 128 Sprites. A 1U avionics bus will provide power, communications, and command and data handling functions. A 2U deployer has been developed to house the Sprites. 128 Sprites could be stacked atop a spring-loaded pusher and secured by a nichrome burn wire system. For the flight, only 104 Sprites were on board. A timer releases the Sprites 16 days after launch, backed up by the command receiver to release the Sprites by command.

After being released from the P-POD, KickSat will perform a de-tumble maneuver and establish communication with Cornells ground station. After check-out, the spacecraft will be put in a sun-pointing attitude and spun up to maintain that attitude. After deployment, telemetry and sensor measurements from the individual Sprites will be received through Cornells ground station in Ithaca, NY, as well as several other amateur radio ground stations throughout the world.

The Sprites were expected to reenter the atmosphere and burn up within a few days or weeks depending on atmospheric conditions. Their worst-case maximum orbital lifetime is estimated at 6 weeks.

The development team were investigating uses for the KickSat bus after the Sprite deployment and are seeking collaborators who could make use of its capabilities as part of an extended mission.

Several CubeSats were launched together on ELaNa-5 / CRS-3. Launch parameters are 325 × 315 km with 51.5° inclination on a launch from Cape Canaveral.

Kicksat-1 operated on 2401.2-2436.2 MHz and when deployed all the 104 Sprites will operate on a single frequency 437.240 MHz and use CDMA. It would have been the largest ever deployment of satellites.

Kicksat-1 was successfully launched on the ELaNa-5 mission and was to deploy the Sprites 16 days after launch, but radiation induced reset of the timer postponed the deployment to a time after the likely reentry date of Kicksat-1. A problem in the powersystem also rendered the command receiver inoperable, so that no override could be sent to deploy the Sprites by command. Kicksat reentered between 13 and 14 May 2014 before any sprites could be released.

A reflight of this mission, KickSat 2, featuring improved avionics and power systems, is planned to be ready for launch in August 2014. It was to fly on the Cygnus CRS-6, but was delayed due to the lack of a suitable co-passenger cubesat for the deployer. A launch on Cygnus CRS-5 was then planned, but issues with the experimental license from the FCC delayed it to a later launch. Eventually it was launched on the ELaNa-16 mission on board of the Cygnus CRS-10 cargo vehicle and was deployed on 13 February 2019 from the spacecrafts external deployer after departing from the ISS. On 20 March 2019 the signal to deploy the sprites was sent. Signals from several Sprites were received.