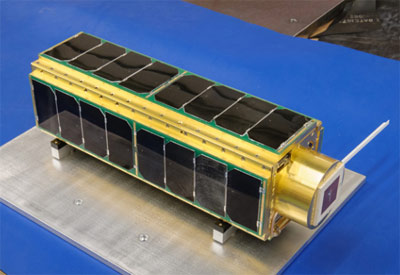 The SporeSat is an autonomous, free-flying three-unit (3U) cubesat to be used to conduct scientific experiments to gain a deeper knowledge of the mechanisms of plant cell gravity sensing. SporeSat is being developed through a partnership between NASA's Ames Research Center and the Department of Agricultural and Biological Engineering at Purdue University. Purdue University Principal Investigators are Amani Salim and Jenna L. Rickus. Joon Park is a Co-Investigator on the project, also from Purdue University.

SporeSat's space biology science experiment will investigate the effect of gravity on the reproductive spores of the fern, Ceratopteris richardii. Some plants, including C. richardii, use gravity to determine direction and to guide their roots to grow down into the earth where they find nutrients for growth. Calcium is important to overall plant growth and development, but it also plays a role in the process of sensing gravity and signaling the response of downward plant growth. To better understand the role of the on/off modulation of cellular calcium ion channels in gravity sensing, the SporeSat experiment will measure the effect of different artificial gravity levels on calcium concentrations that result from the opening and closing of these channels. Specifically, the SporeSat experiment will utilize three lab-on-a-chip devices, called bioCDs, that integrate the sensors that allow for real-time measurement of calcium signaling at each of the variable gravity treatments planned for the experiment. In the microgravity environment of Earth orbit, two of the devices will each have a motor to provide artificial (centrifugal) gravity at pre-determined levels. The third device will remain stationary to serve as a microgravity control.

The SporeSat mission flys using a 3U nanosatellite weighing approximately 5 kg. SporeSat utilizes flight-proven spacecraft technologies demonstrated on prior Ames nanosatellite missions such as PharmaSat and O/OREOS as well as upgrades that increase the hardware integration capabilities with SporeSat science instrumentation. In addition, the SporeSat science payload will serve as a technology platform to evaluate new microsensor technologies for enabling future fundamental biology missions.

The Investigators at Purdue University are responsible for development of the science payload, specifically the lab-on-a-chip device that supports and measures the fern spore ion channel activity and, in collaboration with NASA Ames, for measurement electronics circuit board assemblies.

The SporeSat spacecraft will be contained within a Poly Picosatellite Orbital Deployer (PPOD) during launch, which also deploys the satellite once it is in orbit.

SporeSat was competitively selected for NASA's CubeSat Launch Initiative in 2012 and is currently manifested on SpaceX-3 launching from Cape Canaveral in November of 2013. The mission is funded as part of the Space Biology Project at NASA Ames Research Center. Funding for Space Biology comes from the Space Life and Physical Sciences Research and Applications Division within the Human Exploration and Operations Mission Directorate at NASA Headquarters. It was launched on the ELaNa-5 mission.